The facts about this congressional race will open your eyes

Who is Out of Touch in our district? 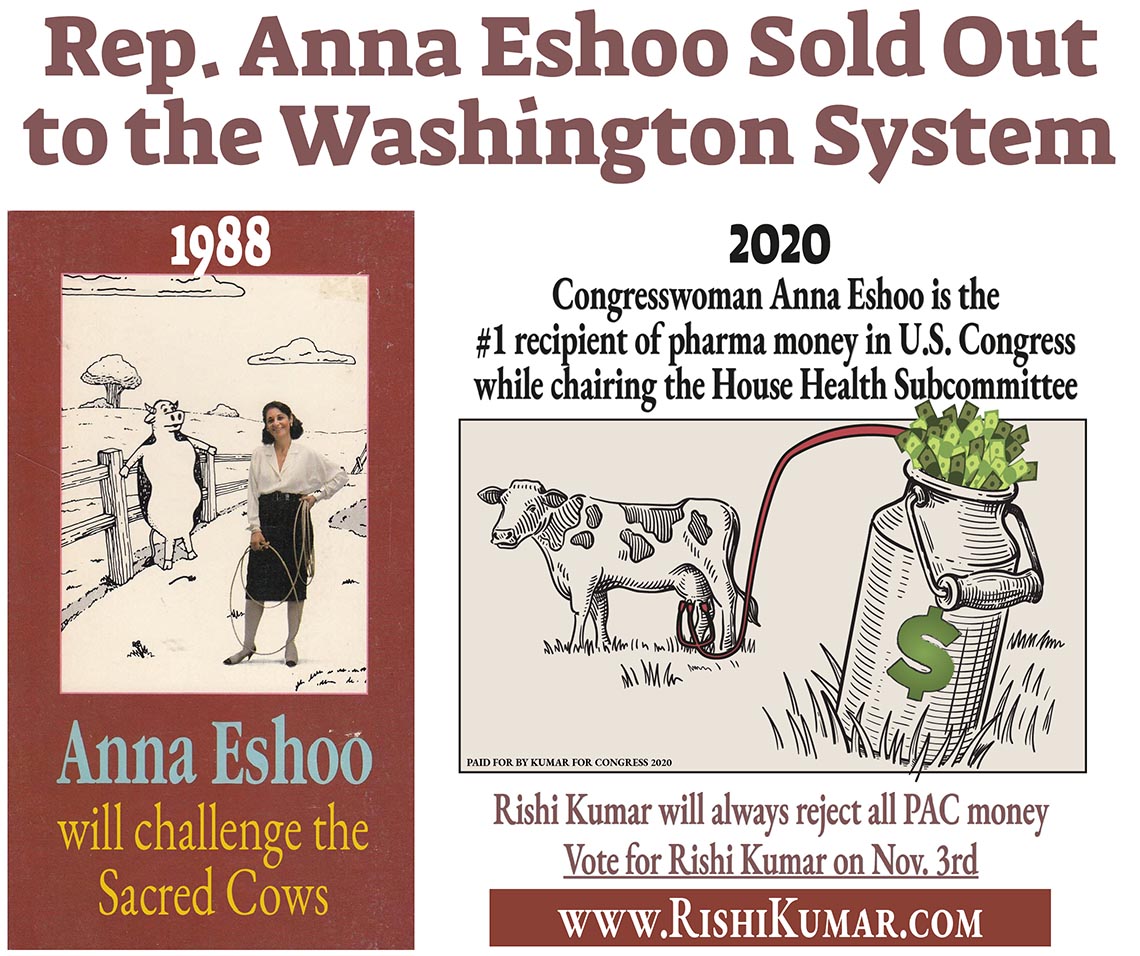 That’s the number of American adults who couldn’t fill a prescription last year because the costs were too high. And it’s all the shameful work of one of the greediest industries in this nation: Big Pharma.

Don’t get me wrong — I know how important the pharmaceutical industry is to the health of this nation. But for far too long, they’ve prioritized profits over people, skewing the rules in Washington to work in their favor. Since 2003, Big Pharma has spent over $2 billion on lobbying Congress, bribing elected leaders with hefty donations and special treatment. And as a result, they’ve written laws that have priced Americans out of their medication for decades.

Can you guess who their favorite Congresswoman is?

She’s right here in our district — Rep. Anna Eshoo. And come November, I will be very happy to replace her in Washington and bring some much needed change to healthcare in the United States.

The reality is, Anna has been in this district for 28 years and continues serving at 77 years old. But…she hasn’t challenged the sacred cows. She’s sold out to the special interests. As the #1 recipient of Big Pharma money in the House of Representatives, Anna Eshoo went against President Obama in 2010 to pass legislation that let Big Pharma limit competition and keep drug prices high. After the Stanford Daily shared their concern for her ties to Big Pharma, Rep. Eshoo herself ADMITTED to receiving hefty sums from the industry and even tried to justify it.

Of course, these donations have directly influenced Rep. Eshoo’s ability to legislate. As you are aware, she worked with former Republican Rep. Joe Barton (TX-6) in 2010 to draft legislation that heavily regulated certain generic drugs from entering the market. And in 2019, Rep. Eshoo stated she was “not out to punish” the pharmaceutical industry — despite well-documented evidence that Big Pharma has been directly responsible for prioritizing profit over people for decades.

It is precisely this type of corruption and undue influence that has allowed pharmaceutical companies to reign the halls of Congress for years — and why California’s 18th Congressional District desperately needs a change in representation. Ever since I announced my candidacy for Congress, I have been an ardent supporter of both Medicare for All (H.R. 1384) and the Bring Drug Prices Down Act (H.R. 1046). I have met with members of my community who have been directly affected by the high prices of drugs.

Here’s the deal: healthcare should be a human right. No American should be denied a prescription refill because they can’t afford it. And that’s why last week, my campaign sent a letter to David Mitchell, the Founder and President of Patients for Affordable Drugs. His organization has led the national conversation on drug affordability for years, highlighting the stories of thousands of Americans who have been negatively impacted by the greed of Big Pharma. I explained to David why we need to prevent corruption and undue influence that has allowed pharmaceutical companies to reign the halls of Congress for years. It is time to put an end to it now, and next year, as your Congressman, I’ll do exactly that.

Like me, David knows it is time for Anna to go. As he told The Hill, “Anna Eshoo’s record on drug prices is terrible… She’s taken enormous sums of money from drug corporations, and she does their bidding in Washington. [Voters] deserve a representative who will work to lower prescription drug prices, not one who is in the pocket of Big Pharma.”

I agree — and I hope you do, too. It’s time we send a message to Big Pharma lobbyists once and for all: get out, and never come back. That starts with sending someone to Congress who has pledged to reject all PAC, corporate, and special interest money, no questions asked.

Can I count on your support?